The Indian place is just a block from Asa’s flat, in a half-basement. It’s dark and cozy, and, at this time, almost empty.

“Your lecture. Tomorrow. What’s it supposed to be about?”

The waiter has just taken our order, and I’m already munching on crisp papadum.

“Er—it’s a sort of graduate seminar about Spinoza and Marx.”

“Ah, so I take it you’re expecting a huge crowd?”

“You’re taking a piss, but actually yeah: they’ve put me in an auditorium. Good old Spinoza is quite fashionable at the moment.”

“Obviously. Pink is the new yellow, and Spinoza is the new black: everyone knows that…”

On the television behind the small bar, a Bollywood film from the 1960s is playing, complete with elaborate dance numbers and jaunty melismatic love songs.

“Indeed, and now certain people—academic philosophers like me (but also others of the more distinguished variety), as well as sociologists, geographers, historians, political scientists, some of the less blockheaded economists, whatever… People concerned with the social world, you know, we’ve taken Spinoza’s philosophy out of cold storage of late, to help us think about stuff like political freedom—about the possibility of emancipation in the present context.”

“I see, yes: perverting the youth and fomenting revolution and so on…”

“We, the neo-Spinozists, if you like—we believe that Spinoza’s conceptual apparatus can be a very useful tool to try to understand why freeing ourselves is proving so difficult. In general, of course, but especially right now—when it seems that capitalism in its present form should by all rights already be collapsing on itself. I mean, especially after the last crisis. But it just isn’t. So why isn’t it?”

“Well, because it’s so deeply entrenched as a global system of power, for one thing. But also—and this is where Spinoza comes in—because it’s particularly adept at generating affects that set people in motion in its service. That’s the key. Positive and negative affects, all pulling in the same direction: feeding lust, sowing fear, weaving spells—capturing hearts and minds… That’s why we’re in such a damned pickle.”

On a larger television, mounted on the back wall, near the doors to the kitchen, an immaculately kitted out bowler has just taken a wicket, causing his equally spotless teammates eagerly to rejoice—but in silence, because the sound is off.

In a solemn procession, the onion bhajis and the samosas arrive…

…they are delivered with charming earnestness by two bashful young persons, who, it later transpires, are the restaurant owner’s eight-year-old niece and daughter.

“Oh, thank you darlings! —Zimbabwe huh? Listen, professor, let’s try not to get sidetracked by my shenanigans.”

Intermittently, my mind keeps wandering. I’m having trouble tethering it, but I want Asa to go on talking: his voice feels like a warm subterranean rumble—a grave, ample, pacifying blanket of sound.

“How could I forget such a sight on such a night?”

“It was that capital—it isn’t really a thing, like cash or machines, or what you like. I mean, yeah, those are incidental forms of it. But at the core, capital is actually a type of social relation.”

Dishy female cowherds dance around the Lord Krishna, above a forlorn mop bucket.

“It’s a social structure of domination that allows a few people—the capitalists, who control the means of production, and are the principal wielders of credit—to exploit all the others to some extent.”

The steaming hot aloo in the samosa burns my tongue, and I have this eerie but not unpleasant feeling of déjà-vu: this same body again, this same configuration—I’ve been here before, or at least a person indistinguishable from me, who happens to share all my experiences has. Intimations of staggered time… In a flash, it’s gone.

“The thing is: why does this multitude—the many—the 99%—whatever you want to call them—why do they let the few get away with it? Marx explains in great detail how it all goes down. But not why people—uh—societies are so vulnerable to their nefarious manipulations—to these outrageous, and, you would think, resistible depredations.”

“It’s ninjas. Is it ninjas? Please let the answer be ninjas!”

“In other words, Marx gives this brilliant structural answer, but what’s missing from his analysis is a way to identify the human reality that must underlie such a structure of domination—the anthropology that makes it viable.”

“Anyway, that’s what I’m supposed to be working on right now. Spinoza has a very powerful framework for understanding what makes us tick individually and collectively, a whole theory of passions. His idea is that most people are basically passive. We submit helplessly to various passions, the powerful emotions that arise involuntarily as a consequence of our interactions with the world. These then struggle for dominance within us: subjucating us, determining us to act, seizing us like intractable external agencies—and reason is the only tool we have at our disposal to escape their imperative force. Without reason, we tend to be dominated by these passions, and we grow oblivious to our true inner nature, laboring unhappily under crippling misapprehensions. Spontaneously, our point of view is partial and confused—our understanding of the world mangled, and our relationship with it delusional. And as a result, we are the opposite of free.”

Without warning, I’m pulled out of the diffuse state of spacing out that I had been erratically floating in: Asa’s words finally catch something in me, and, like a hook, reel me back into active engagement.

“So you mean you’re interested in how people are moved by unconscious forces that determine them. Like Freud’s idea. And Durkheim’s.”

A gale of spirit on the flat sea of my listlessness has arisen. It runs through me, and, all at once, I drop the autopilot boffo banter I’ve been relying on since we sat down:

“Durkheim, right? His thing was that, for example, people think they’re, you know, committing suicide for personal reasons—but in fact, according to him, when they off themselves, there always exist impersonal social determinations for their actions. Like, these determinations—statistically, they lead a certain type of person to become more likely to just fucking do it. That’s his whole point—what his sociology is supposed to be about: that some things we do are systemically conditioned by society as a whole. We express, we echo, we react in our body and our mind to different aspects of it—of society—to how it’s like “set up” at a certain specific time and place. He says we’re necessarily caught inside a system that—in the aggregate at least—decides really important things for us.”

As I run out of words, my sails slacken—

“Yeah, so, social context is often a deciding factor—the deciding factor—, even though the victims, the actors—we—are mostly totally unaware of what’s actually moving us to act. And it’s not just suicide: it’s everything. Like what you’re talking about. Uncontrollable passions are pulling people’s fucking strings…”

—and now, for no immediately discernible reason, I feel like crying.

“Wow, Charlie. Right. Just so! And that’s why it’s so damned important to understand the passions and how they affect us—to become aware of their heteronomous nature. Spinoza allows you to do that: to see them not just as labels for individual psychological experiences, but as more general notions, which, from the outside, shape how interactions—between individuals, between social groups, and actually, according to him, between, you know, uh, different bits of the universe—how they play out. How these bits might come together, and either compose with each other or clash and diverge.”

Mercifully, right then, the waiter turns up to serve the main dishes—and for a while, we’re too absorbed by the rogan josh and the butter chicken to talk.

At one point I almost blurt it out:

“Oh no. I’m so sorry darling… Would you like my last piece of nan?”

So I keep quiet: one dolorous nodal point—one “finite mode” amidst the teeming multitude—the ever branching, swirling, reverberating, assembling and disassembling matrix of passionate tangles that together deploy the substance of the world. 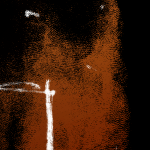 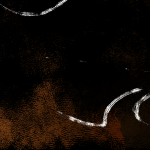