“Are you serenading me?”

I’m at Asa’s place, naked in the afternoon, sitting on a hard chair, enjoying the feeling of the rug under my bare feet, and the clean, warm, luminous space of his small but tastefully appointed loft. I’m noodling moodily on the guitar.

“That’s exactly what I’m doing. Do you like it?”

I had lugged it because I was supposed to be at my weekly lesson, but instead I came here to be assuaged. We made love, and I can’t honestly say I regret it. On-again off-again affairs are morally exhausting I find, and on the whole, I disapprove of them. But, sometimes, in the event of force majeure… It seems I do make the odd exception.

“It’s beautiful, yes—but, you know: melancholy. Are you all right?”

Asa is kind and funny and well spoken, and I’m almost certain that I do not love him.

Sitting up in bed, he’s slipped on his thick-rimmed tortoise shell glasses and started scribbling something on a yellow pad.

“My darling, you can stay as long as you like—but I hope you don’t mind, I wasn’t expecting your visit, and as usual, I’ve left things to the very last minute—”

The untidy beard, the sturdy frame, the softly protruding gut, the ever-disheveled ginger mane, the curious mix of dignified and ridiculous, inhibited and free, lithe and clumsy…

“—I have to prepare the lesson I’m meant to give tomorrow morning.”

…I always think of him as a reassuringly bumbling character from some impossible children’s book: you know, the lovely learned lion. Or, better: the beastly bookish bear. (“Such an extremely well-mannered bear really is quite extraordinarily rare!” Mrs. Fox remarked, with some gratification…)

“Do what you want. I’ll just keep playing—”

He wasn’t much more than a decade or so older than I was, and quite a good professor.

“—and then maybe, when you’re done, you’ll take me out for a curry.”

“Your wish is my command.”

Last year, I had been taking classes at St. Luke’s for a while, more or less at random. This one was about The Radical Enlightenment or something. I don’t remember much about the lectures: just that they were lively and clever. Asa was replacing somebody. He was very bold with me. I think he’s actually quite a timid person, naturaliter, but that doesn’t come across at first, because of the peculiar way he hovers between seemingly incompatible “presentations of the self.” It’s not that he’s false or artificial at all, but, on the surface at least, he gives the impression of being somehow puzzlingly unfixed in his relations to others—of existing in alternate gusts of reckless audacity and inexplicable inhibition, of good humor and depression, of princely, grounded warmth and sullen reticence. But he is a consistently pleasant and earthy lover. Like erotic onion soup—which doesn’t sound like a compliment, I know, but I think it is, rather.

After what seems an age, but might have been only a minute, I get bored playing, and put down the guitar to go examine his books. I pick up something called Ontological Relativity And Other Essays.

“Can I borrow this?”

Undeterred, I pick up something else called Difference and Repetition.

“And how about this one?”

“You can borrow any book you want.”

What I enjoy most about Asa is the aura of settled calm that emanates from him when we’re alone. Getting to know him, one does soon discover that he labors under considerable inner tension—but this never seems to affect the soothing quality of his presence in quiet, unguarded moments.

“I think you should make me a reading list. You know, for private study.”

“You know: everything. How it works. Society. People. The world.”

“The meaning of life?”

“Yes, actually, that would be super!”

Over time, one comes to intuit that the changeful, wavering quality of his public persona actually obscures a wholesome but secretive center—like a shroud of tempestuous weather storming over a rockbound planetary core. And only a subtle, radiating self-assurance gives it away—an almost imperceptible gravitational pull.

“I think you should tell me a story.”

A planet, a cartoon bear…

“Once upon a time, there lived a very beautiful, but also very impatient and presumptuous damsel, who, ever so often, demanded a great deal of attention…”

At the moment, I fancy him an oasis in my desert of distressed aimlessness: Asa, whose humorous forbearance and bonhomie and loneliness it requires a heroic level of selfless discipline—to which I’m afraid I’m today quite unequal—to refrain taking easy advantage of.

You can’t always get what you want. But, when you try sometimes, you get what you need. And I do need distraction.

“You’re right, actually. I do apologize.”

And so I come nearer, and he gets up, and we embrace. And after a lingering kiss that I envisage as a performance for the invisible audience in both our heads, I start getting dressed.

“I’ll just improvise tomorrow’s class, I suppose. And if it’s a wreck, I’ll blame you and give them your number to call and complain.”

Picking up strewn bits of clothing along the trail that leads away from the bed—knickers, jeans, bra, socks, t-shirt, jacket…—I can’t help thinking of empty hospital rooms and intergalactic voyages.

One shoe proves elusive: it’s hiding under a stuffed chair, frightened and alone. 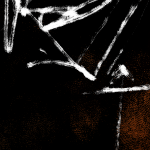 Next Post:marx, spinoza, and the ninjas 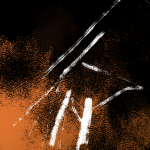